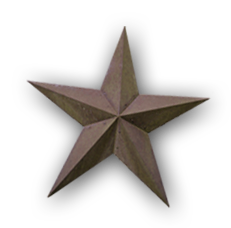 “Even during the Depression, it’s hard to imagine a 55-year-old building being sold for only $1. But that’s what the Commissioner’s Court of Houston County sold their 1883-vintage courthouse for back in 1939. There was a catch, of course. The new owner of the structure had to agree to tear it down immediately so make room for construction of a new courthouse. The county found a buyer, who presumably recouped his investment by selling material salvaged from the building, and the building was razed. County officials conducted their business in the nearby Crockett Hotel until the new courthouse was completed. That one, a stone, Moderne-style structure which cost $200,000 to build, still stands on the square in Crockett.

There are so many fine examples of older architecture in Crockett, it would take pages to show them all. Ride around, learn and enjoy the small town flavor in this East Texas town.

On almost any Saturday night, hundreds of East Texans crowd into an old Crockett building known as the Camp Street Cafe and Store. And in doing so, they’re helping Guy and Pipp (sadly Guy has passed) Gillette write a new chapter in the history of the building — a one-time pool hall, barber shop and juke joint.

The Gillette brothers’ grandfather, Hoyt Porter, built the simple high-roofed, tin-sided building in 1931, but he never occupied it, instead leasing it to store owners in a part of town known as a black business district.

The Gillette brothers, who have built a national reputation as cowboy musicians and story tellers, rescued Grandpa Hoyt’s building in 1998 and converted it into a home for visiting musicians.

The building already had reputation as a music venue. Lightnin’ Hopkins and other blues musicians played here years ago. A statue of Hopkins stands across the street from his old stomping grounds.

The Camp Street Cafe and Store is about as eclectic as you can get in East Texas. Every Saturday night, and some weekdays, performers step onto a small stage and do what they like to do best. Audiences are likely to hear cowboy singers, Irish musicians, and bluesmen.

The Gillettes play here, too. And even though they’re reluctant to impose their music on the hometown folks, they pack the house when they walk onstage with their guitars, banjo, harmonica, an Irish drum called the bodhran, and the bones — an ancient instrument crafted from the ribs of a cow.

Somehow, an instrument made from cow bones seems fitting for Guy and Pipp.

When they’re not playing at cowboy music and poetry festivals around the country, they’re up to their guitar straps in a real working cattle ranch near Lovelady.

The ranch has been in the Gillette family since 1912 when their grandfather Gillette started growing cattle and cotton on the spread. The Gillette and Porter families merged when Doris Porter married Guy Gillette. The couple wound up in New York, where Doris performed in Broadway plays and Guy built a reputation as a free-lance photographer.

Their young sons, Guy and Pipp, often came home to East Texas, riding the train from Grand Central Station to Lovelady, where they rode horses with their grandfather, made campfire coffee, and rounded up strays.

In New York, they grew up with music of all kinds — everything from Duke Ellington to Jimmie Rodgers — and started singing and playing together. By the 1970s, they were making a living with music.

But as they grew up, the old ranch they loved was leased out. Looking over its rundown condition, the brothers decided to come home, restore the ranch, and become full-time cowboys.

They also became singing cowboys, performing at events showcasing the old west’s culture. They recently won the Academy of Western Artists’ Will Rogers Cowboy Award and regularly get flattering reviews for their performances.

Today, their New York life is a part of the past. Guy has been back to the Big Apple only three times in 17 years, Pipp only twice. The ranch, meanwhile, has been restored, and it’s home. And there never seems to be a shortage of cow ribs to build a set of bones to play on the stage of the Camp Street Cafe and Store.

Event Hall (cost by quote only)